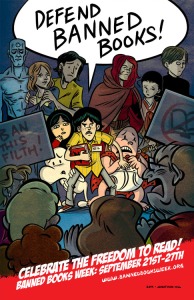 Here it is again. A week in which we celebrate creativity and power of the first Amendment. It is Banned Book week and sad to say books are still constantly being banned from libraries and schools.

Here are my thoughts:

You do not have to read these books and as a parent you should read the books your child brings home.

Just because you do not like something does not mean that it applies to the person next to you.

This week I will display a series of books under different categories that have done something to my life and my reading experience.

I hope that after this week, you will be encouraged to read these authors and to fight against censorship.

I don’t  usually read political books but I was drawn to this book thanks to tumblr and the protest around this book.

This book is Marjane Satrapi’s memoir about growing up in Iran during the Islamic Revolution.   For a graphic novel it is very detailed not just in the illustrations but in the words itself. Satrapi was child who was very outspoken, very political in everything she did. She had a great-grandfather who was Iran’s last emperor which made the story more interesting because it was connected to Iran’s history directly.

Throughout the story, which I hate to call it a story because it was the author’s life, there are a lot of references to her family members who have been part of the revolution not as civilians but as active protestors/fighters. Her father was a photographer at one point.

As I stated the book is so detailed and she is such a likeable child for her thoughts and the fact that she wasn’t too afraid to speak her mind and express her views. She was extremely strong and you can see that strength in this book.

This is also an eye opener for those who do not know much about the Islamic Revolution or what it did to those who weren’t Islamic.

As for the actual graphics of this book it was simple black and white with detailed illustrations. I have no complaints because the story was important nothing else really.

As much as I hate to rate this it is still a book so its get a 10 out of 10. There was nothing bad about it. Her life was nothing compared to mine and I can’t even image being in her shoes as an adult or a child.

Another year has come . .  another banned book week. Each year the list gets bigger and bigger. It’s sad really sad that after all this “freedom” we have in this country books are being banned for some really ridiculously things. Honest instead of asking the school or state to ban a book ask for an alternative for your student to read. It is that simple.

Anyway here is my list of favorite banned books. You can also check out American Library Association for the list of banned books or ways to fight back.

Persepolis: The Story of a Childhood by Marjane Satrapi

James and the Giant Peach by Ronald Dahl

A Lesson Before Dying by Ernest Gaines

Of Mice and Men by John Steinbeck

Thirteen Reasons Why by Jay Asher

A Wrinkle in Time by Madeleine L’Engle

The Lovely Bones by Alice Sebold

Where the Wild Things Are by Maurice Sendak

A Light in the Attic by Shel Silverstein

The Giving Tree by Shel Silverstein

Their Eyes Were Watching God by Zora Neale Hurston 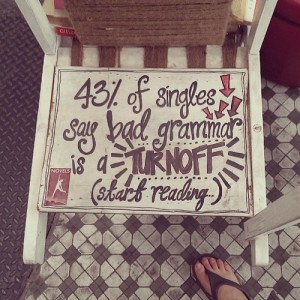 Zoobean is a website that helps parents find books for children. The thing that is so special about Zoobean is a parent can look on this

website specifically for books that children can identify with. For instance, if the parent wants to look for bullying books, or hygiene books, you can simply type that in and will find a list of books to choose from.

This is awesome! and extremely convenient for parents trying to help their children read books that can help them in all aspects of life. Of course you can use this site to get books just for fun as well.

I think this site is a great site because I am a strongly believer in parents knowing what their child is reading. Granted you cannot be there for everything and no I am not going to be one of those uptight parents that is over the child’s shoulder. I just believe that it doesn’t kill a parent to know what the child is reading.

Check out the site here

Digital Public Library of America is now open for business (I may be late be this news to me!) This is a free, open-source resource that allows people to access digital collections and archives all over the country. DPLA has been in the making for a little over 2 years now and although it is an amazing and reliable source to have I am still weary of the idea of a digital library.

Libraries all across America are struggling to keep their doors open. There have been plenty of campaigns and although it has helped a little bit it has not killed the problem. I’m not going to go on a spree of why this is bad and blah blah blah because I actually think it’s a good thing; I just don’t want people to depend solely on this and decide not to go to the library for physical copies.

Check out DPLA and browse around :)

Motif by Tanya
Powered by WordPress.com.