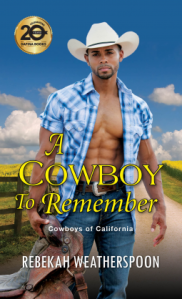 With a headline spot on a hit morning show and truly mouth-watering culinary skills, chef Evie Buchanan is perched on the edge of stardom. But at an industry party, a fall lands Evie in the hospital—with no memory of who she is. Scrambling to help, Evie’s assistant contacts the only “family” Evie has left, close friends who run the luxury dude ranch in California where Evie grew up. Evie has no recollection of them—until former rodeo champion Zach Pleasant walks into her hospital room, and she realizes his handsome face has been haunting her dreams . . .

Zach hasn’t seen Evie in years—not since their families conducted a campaign to make sure their childhood friendship never turned into anything more. When the young cowboy refused to admit the feelings between them were real, Evie left California, making it clear she never wanted to see Zach again. Now he refuses to make the same mistake twice. Starting fresh is a risk when they have a history she can’t recall, but Zach can’t bear to let go of her now. Can he awaken the sleeping beauty inside her who might still love him?- Goodreads

I had read the excerpt for this book through Netgalley some months ago and was pissed because I got sucked into the book and didn’t realize that it was a excerpt. This book takes your attention instantly and you just want more.

I liked this book but I didn’t love it. I liked the fact that the author took her time to build up the characters not just Evie and Zach but everyone. It was such a relief to see that the author didn’t rush the overall story. But with that being said, this book is slow. A whole lot of nothing happens for a very long time and I am not talking about the romance. Nothing really happened and with that being said the romance wasn’t spectacular either. It was hard for me to believe Evie and Zach and that was disappointing.

However, with that being said, I loved Zach’s brother and I hope that book two is from his brother’s point of view and his love story.

Overall, not a bad beginning to a series but there needed a bigger spark and much more investment to keep things going and going as strong as the beginning of the book was.