I am a fan of horror, thrillers and words like grim, psychological and scary. I am a fan of these things because I understand what they mean. Lately I haven’t had much luck with stories that claim to represent these words. So I am going to break it down.

Definitions (As per Dictionary.com);

Horror: an overwhelming and painful feeling

caused by something frightfully shocking,

or story, especially a mystery story.

Grim: of a sinister or ghastly character; repellent.

Psychological: of, pertaining to, dealing with,

or affecting the mind, especially as

a function of awareness, feeling, or motivation.

Now a lot of author or even their publicist constantly attach these words to books without actually realizing that the books do not live up to their word. Here are some examples: 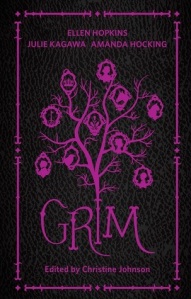 This book is a collection of short stories by some of the most beloved authors such as Ellen Hopkins, Kimberly Derting and Sarah Rees-Brennan.

These were stories based off the Grimm Fairy Tales and while some were very creative others were very bad. But no matter how good they were (or bad) the stories didn’t scream scary or grim for that matter.

Let’s make this clear when the Brothers Grimm produces their stories, during their time it was scary; they did move people to re-think the shadows. But these stories are only grim in the sense of you finding out your secret boyfriend killed his girlfriend. Like come on. None of the stories made you think or even gave a chill up the back. They didn’t provide the reaction the word grim is known for.

This book was supposedly based off the horrible true story of Amityville Horror.

Now there have been countless of stories and movies that shake your core, so if there is going to be a comparison there is a huge expectation. This book didn’t deliver in any kind of shock or scary factor. It was told in two points of view the past and present and both of the kids were weird but in a lacking type of way. For more details check out my review here.

These two books were my biggest horror let down’s this year thus far. The expectation that was there for these books really hyped them to a point of excitement.