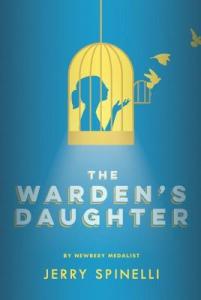 Cammie O’Reilly is the warden’s daughter that lives in an apartment above the entrance to the Hancock County Prison. Although her father is active in her life, she is missing her mother. A mother, who saved her only daughter from harm.

Known as Cannonball, Cammie is about to turn 13 years old and is looking for a mother figure within a shoplifter and a reformed arsonist of a housekeeper. Going through the motions while her best friend begins playing with makeup, Cammie has no idea everything she has ever known or thought of is about to change in the most dramatic way.

I had issues with this book. The first being Cammie. This is a difficult time in her life and she is learning to find herself, HOWEVER, she is a spoiled brat that is completely selfish and treated one of her mother figures like crap just because she didn’t get her way.  Let me give you an example, you have a housekeeper that you like but you do not like when you are told to do something by them because they are a housekeeper. So you proceed to call her out on it and remind her who she works for. That is Cammie. I get she is a child but she is a child that thinks everything out before she does it. Things like this happen all the time in the book and I was frustrated with it.

The book overall was lackluster. I understand that it is a coming of age book, but almost nothing happens a majority of the time. The tone rarely changes; so everything starts to sound the same. I didn’t appreciate how the main characters was viewed. The book is set for 1959 until the end; so there are things that are to be expected but there were some things that cannot be overlooked such as the view of a black woman.

Beyond that, I felt that Cammie a an adult had no real remorse for what happen, for the life she affected and for the things that was done. I felt a sense of entitlement even after everything was said and done.

I did not enjoy the pace of the novel and I think because of the issues within the book, I lost the purpose of the story.