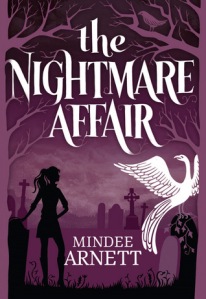 This is going to be a popular series.

Dusty Everhart is what is called a Nightmare. She breaks into people’s home to feed on their dreams. She is the only Nightmare at her boarding school Arkwell Academy and her mother is fairly famous from her antics in her days. So trying to have a normal seems far fetch. It officially becomes impossible when she breaks into Eli Booker’s home and begins to feed on his dreams.

Unlike the normal dreams of girls, sports etc she dreams of murder with Eli and that dream comes true. Things instantly become complicated as Dusty with the help of Eli and her best friend try to use clues from Eli’s dreams to solve a string of murders.

This was a well written book. The connection between Dusty and Eli wasn’t instant and I appreciated that. Although Dusty was attracted to him she went her own way regarding relationships as well as Eli. I thought that this was important because it shows that Dusty and Eli could build into a relationship if the author chooses to. It is expected for them to get in a relationship but it may not happen; Arnett did a good job of leaving things open.

Dusty was too weak for me and she felt she could never do anything. I’m pretty sure we (the readers) will see her grow throughout the series but I seriously never heard a girl say she can’t every other page. Eli supported a lot once he stopped being a jerk.

This book gets a 8 out of 10. I look forward to the characters growth throughout the series and secrets Dusty will be learning hopefully about her mother (who is alive and kicking in the book).